Tags
Android
Google has done a good job of giving app publishers the tools they need to make their apps the best right in the Developer Console.The programmers can let few users to test their new app updates.If the people like it, then they will roll out the change to everyone if not, then you can figure out how to use that feedback to make your app better. Programmers can also identify bugs that might be irritating for new users.

There are 3 different ways for beta testing:

Anyone who has your link can be a beta tester. The biggest advantage of open beta testing is that you can create a large community of testers but these testers cannot leave a review for your app. You can also limit the size of your group to keep things more manageable.

A more restricted option is to make your beta group available only to people who are invited via email.You can add members individually or upload as a .csv file.

Google Play beta testing can also be built around a Google+ community. It is a great way to have a central place where you and your team can interact with your beta testers. Simply go into your Developer Console and link your Google+ testing community in your account. Once you are done, you can send the link for the group to your testers.You need to keep your testers engaged and give you valuable feedback.

Testing your app is simple. First, upload your beta APK to the Developer Console.Then notify your beta testers to give it a try. If it passes the testing phase, click on the  "Promote to Prod" button and that version will be rolled out to all live users in a few hours. 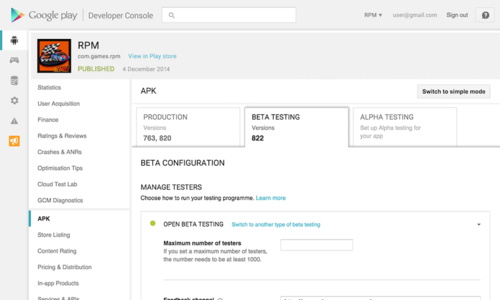 Last week, the Play Store rolled up some beta testing features in its version 6.7 update but they quickly disappeared as Google reverted them back in a server-side change. The company later announced these features at I/O as part of a series improvement to google play that also include lots of developer console changes. 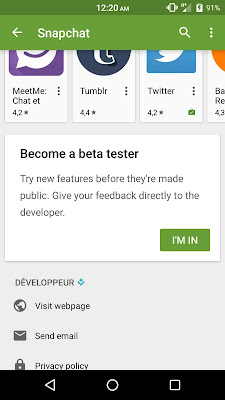 The latest version of play store allows people to join or leave betas right from the app listing page. It’ll also let you leave feedback, which the developer will be able to see but won’t be published in the app review section.